Army Sgt. goes under the knife with robotics machines By Rachel Cole

Just 20 years ago, having surgery meant spending days at the hospital and then taking months to recover. However, advances in medical technology and robotic machines are changing the lives of so many, who have to go under the knife.

One patient, Sergeant Reymundo Zapata had a partial knee replacement performed partially by robotics. He says, his life since surgery has never been better.

“Now I can play with the kids, now I can go dance with my wife again,” he said.

For an entire year though, Zapata says, he was hesitant to get surgery, especially one where the process is done partially by a robotic arm.

“I was nervous at first because I am 33 years old, I didn’t think I was going to have a knee replacement this soon,” Zapata said.

But after a day at the beach with his family in 2014, Zapata injured his leg.

“I was swimming in the water and I was going to run out and that’s when I stepped in a sand bar and my knee buckled,” he added.

Sharp and shooting pains along with swelling throughout the next several months prompted him to get help at Corpus Christi Medical Center.

This kind of major surgery would have meant two weeks of just being immobile, in addition to another six weeks on crutches and at least six months in rehab.

“When I met Dr. Klimisch at his office, I just felt the confidence in him, I just felt like everything was going to be okay,” Zapata said.

Now, five months later, Zapata is back to coaching his daughter’s soccer team, working out and motivating men and women in the army. 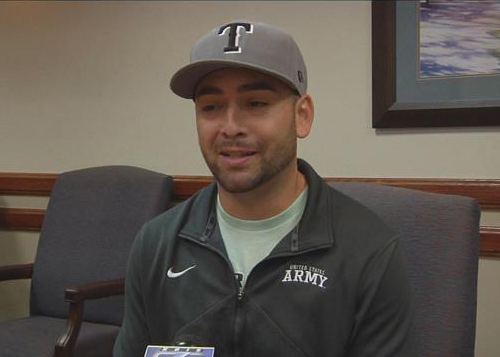